END_OF_DOCUMENT_TOKEN_TO_BE_REPLACED

Sacramento – The first hearing in the WSTA lawsuit challenging the legality of the CA Supreme Court decision imposing a new test for proper employment classification was held on November 15, 2018 at the Robert T. Matsui United States Courthouse in Sacramento, CA.

In April of 2018 the CA Supreme Court issued a decision in case titled Dynamex Operations West, Inc. v. Superior Court establishing a new test to determine proper employment classification. The Supreme Court instituted what is termed an “A-B-C’ test because of three prongs that an employer/contractor must pass in order to be considered a properly classified independent contractor.

The “B” prong is virtually impossible for most of the trucking industry to pass. It requires that [B] the worker performs work that is outside the usual course of the hiring entity’s business. In other words, an owner-operated truck would be viewed an “employee” since the owner-operator and the contracting trucking company are engaged in the same business enterprise – trucking.

On July 19, 2018 the WSTA filed a legal challenge to the permissibility of imposing an “A-B-C” test on the trucking industry. Our legal case leans heavily on federal preemption and constitutional issues. Importantly, we claim the application of an “A-B-C” test violates federal law (Federal Aviation Administration Authorization Act of 1994 or FAAAA). Our litigation strategy is influenced by another federal court case (Schwann v. FedEx Ground Package System, Inc) decided by the United States Court of Appeals for the First Circuit that an identical law in Massachusetts is preempted by the FAAAA (decisions by a federal Appeals court are only binding within that court’s jurisdiction).

In October, the CA Court of Appeal issued a decision that limited the applicability of the “A-B-C” test to the Industrial Welfare Committee Wage Order(s). Specifically for the trucking industry, Wage Order No.9 applies and includes meal and rest break provisions. For all other non-Wage Order claims, the multi-factor Borello test still applies. The association has been aware of this link since the inception of our Dynamex litigation and it’s a significant reason we’ve aggressively pursued getting U.S. DOT to reverse itself on the issue of federal preemption over CA meal and rest break laws (see last section of this article).

The first round of our legal tussle involves both the state of California and the Teamsters (the union intervened on behalf of the state) moving that our lawsuit be dismissed out-of-hand since the United States Court of Appeals for the Ninth Circuit already ruled in Dilts v. Penske that Wage Order No. 9 is not federally preempted.

Our case has been assigned to federal Judge Morrison C. England, the same judge who presided over the association lawsuit challenging the legality of the California Air Resources Board truck and bus regulation. California was represented by counsel assigned from the Attorney General’s office. The Teamsters had two lawyers present and they actually provided a majority of the oral arguments to dismiss our case. WSTA was represented by legal counsel Pat Whalen who was admitted into the California Bar in 1994, and was formerly with the California Attorney General’s Office before joining the association legal team at Ellison Wilson Advocacy in 2008. 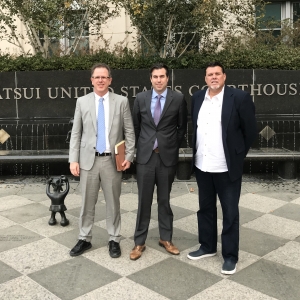 Judge England was direct in his questioning from the start of the hearing limiting oral arguments as to “why” the Ninth’s decision in Dilts was not controlling in this case (in other words, his hands are tied by that decision and dismissal would be proper). The hearing lasted just 40 minutes.

The state and Teamsters were adamant in their arguments that the decision in Dilts precluded our case from moving forward. In questioning Teamster’s legal counsel, Judge England recognized that the “A-B-C” test effectively precluded independent contractors in the trucking industry and asked them to respond. The Teamsters legal counsel stated it has always been the position of the union that “most” owner-operators are misclassified to begin with.

Association counsel Mr. Whalen effectively counter argued that our case presented the court a different set of fact patterns than those presented in Dilts and that the judge should weigh those more importantly than simply relying on the decision in Dilts. Our arguments are not about whether meal and rest breaks apply but whether independent contractors can even exist within the industry.

Mr. Whalen argued further that U.S. DOT is currently considering preempting CA meal and rest breaks as they apply to the trucking industry. He did cite a preemption determination for hazardous materials drivers as indicative that U.S. DOT’s position is changing.

Judge England acknowledged that should U.S. DOT actually issue a preemption determination it would be very relevant to our case. He also stated that no matter what he decides he was aware it will not end the case as we can refile or either party will appeal his decision.

The Ninth in its decision specifically cited DOT’s arguments as “persuasive” in arriving at its decision not to preempt Wage Order No. 9 from applying to the trucking industry. The final paragraph in the court’s opinion stated, “We find it particularly persuasive that the Department of Transportation, which has great familiarity with transportation regulations, sees no evidence that California’s meal and rest break laws will significantly affect the prices, routes, or services of motor carriers.”

Currently, U.S. DOT is reviewing its position as presented in Dilts. U.S. DOT this year actually preempted CA meal and rest break laws applying to drivers of hazardous material shipments. U.S. DOT is currently reviewing a petition filed by the American Trucking Associations (ATA) to fully preempt CA meal and rest break laws from applying to the trucking industry. In July the WSTA submitted a petition to U.S. DOT asking for a similar decision but for a more limited subset of the trucking industry. Our goal was to make the linkage between truck parking and safety – something nobody had done previously. The arguments we made are used as the basis of the ATA petition. The WSTA submitted comments supportive of granting ATA’s petition.

I attended a conference in early November in Nashville, TN. where Federal Motor Carrier Safety Administrator Raymond Martinez was a keynote speaker. He publicly stated he is “very concerned” about allowing numerous states to have laws impacting the hours-of-service of drivers instead of a single federal standard. He promised “it won’t take us long to issue a decision,” referring to the ATA’s petition.

I am very optimistic that U.S. DOT will preempt California from enforcing its meal and rest break requirements on drivers. We may even see a decision by late December. As with everything the Trump Administration seems to decide in Washington D.C., a preemption determination in favor of the trucking industry will likely lead to legal challenges from labor and the state – both are already administratively challenging the determination made regarding drivers of hazardous materials.

The state of California amazingly has argued that their failure to participate in the public commenting period regarding the hazmat driver preemption determination was because “they were not properly notified” by U.S. DOT of the comment period. The federal government utilizes the Federal Register to notify any and all interested parties of potential administrative actions and has no obligation to issue “special invitations” to potentially affected parties.

As a side note; the California Trucking Association filed a virtually identical lawsuit on October 25, 2018 challenging the legality of the decision in Dynamex. They have filed in a different circuit than where our case is being heard (U.S. District Court, Southern District of California).

AG Reply to opp to MTD