The highly anticipated Advanced Clean Fleets (ACF) hearing by the CARB Board took place on October 27th.  Staff released a very aggressive proposal in late August that would restrict fleets of 50 or more trucks or $50 million or more in annual revenues from buying diesel or gasoline-powered trucks after 2023, while at the same time forcing CARB-compliant trucks in certain motor carrier fleets off the road as early as 2024. WSTA members below the 50 truck/$50 million threshold were not initially the target of the proposed rule but are now squarely in the crosshairs. The CARB Board confirmed that small fleets as low as five trucks and those contracted by “controlling parties” will be captured in the Final Regulation to be approved within six months. 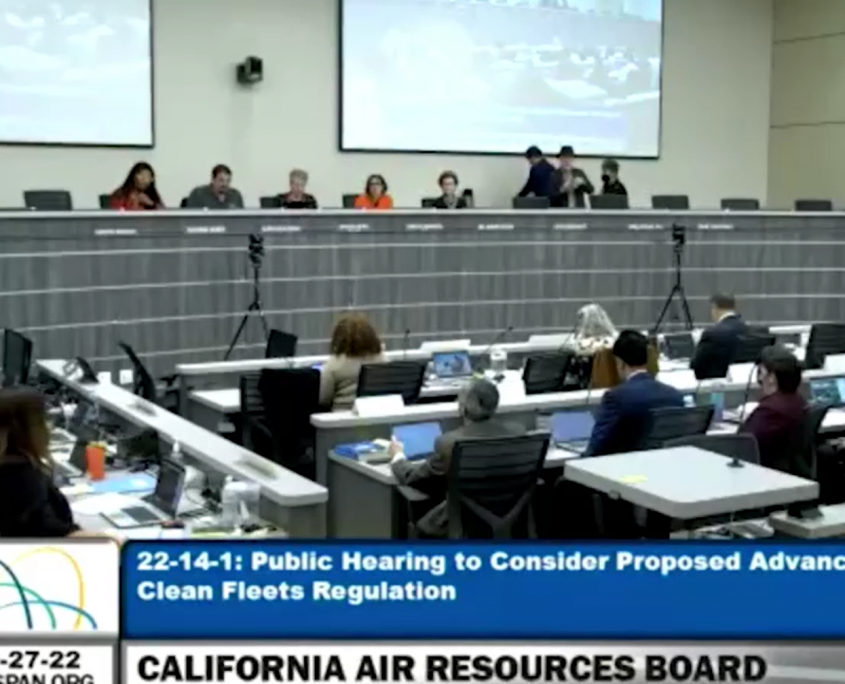 The Hearing: I was one of over 200 speakers that addressed the proposal. Several dozen fleet owners and industry associations, including WSTA’s Joe Rajkovacz and legal counsel, pointed to the voluminous legal, economic, environmental and infrastructure-related consequences that mandating 500,000 electric or hydrogen trucks would have on the supply chain. Unfortunately, proponents were well organized (as is typical) with well over 150 speakers representing like-minded states, environmental groups and organized labor. They all pushed the Board to forge head faster than proposed by the staff.

Fleet Size: In a stunning conclusion to a nearly nine-hour public hearing, CARB’s environmental justice members asked staff to, “go after those trucks that are the worst actors,” by coming back next Spring with a final ACF Regulation that drops the regulated fleet size to as low as five trucks and owners being mandated to purchase only Zero Emissions (ZE) trucks from 2024 onward. In an exchange of ideas that would not have likely occurred under past Board hearings, new Chair Liane Randolph warned against the possibility of “more burden than necessary” and it might be “counterproductive” to drop the regulated fleet size lower than the 50 truck and larger fleets that staff targeted in the initial draft regulation language. CARB’s Division Chief in charge of mobile source regulation explained to the Board that dropping the limit to ten trucks would add “two to three times” the number of fleets included in the regulation. Nevertheless, staff was directed to return with analysis for a final regulation that drops the fleet size limit lower than 50 (as low as the five to ten truck fleet size) and make other changes as summarized below.

The Proposed Changes: None of the CARB members voted to delay or significantly change the structure of the staff’s proposal in terms of forcing regulated fleets to phase-out the Truck & Bus Regulation compliant fleets and stopping regulated fleets from adding diesel or gasoline trucks after 2023. So the structure of the regulation will remain and the Spring 2023 hearing limited to action on the following issues:

WSTA Efforts and Legal Fund: Association staff, consultants and outside legal counsel invested hundreds of hours to produce a 50-page legal filing to the CARB docket as well as engage with other associations (e.g. CIAQC, CTA, CalCIMA, Beer & Beverage and Waste Haulers). I personally met with seven Board members to make the case that the proposal is nowhere near being ready for implementation due to the obvious lack of infrastructure, lack of ZE truck technology that can be used profitably as well as legal concerns from our brief. Especially considering the fleet size discussion, our efforts need to be expanded over the next six months through the Final Regulation adoption. There will also be fleet reporting and planning requirements late in 2023.

WSTA has committed over $100,000 to lead this charge and the Legal Fund has commitments of a little more than half that amount. While the association has never shied away from litigating to protect the interest of members, we must wait until the ACF process unfolds over the next six months and are keeping all options on the table. What is certain is CARB is gunning for more of our members to be included in the ACF.

Legal counsel and I will be making presentations at the 81st Annual Membership Meeting in Costa Mesa on Saturday November 19th.  I highly encourage members to attend as the ACF must be confronted head on and we will ask to give of your time and efforts to help the association fight for you. Until then I may be reached at (916) 520-6040 Ext 104 with any comments or concerns. Hope to see you in Costa Mesa!